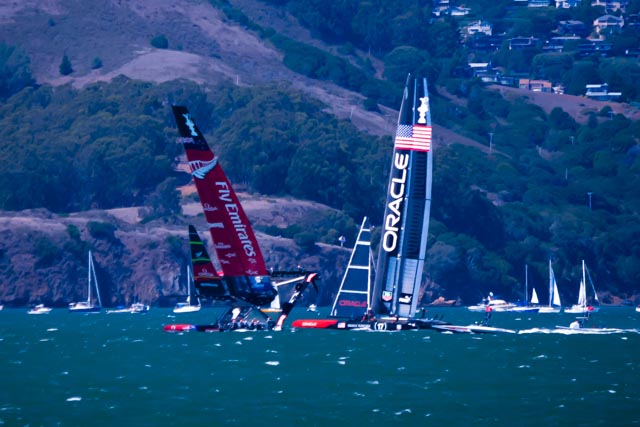 For anyone that has enjoyed the thrilling sport of sailing, what could possibly be better than spending three days in San Francisco, watching  the best-of-the-best sailors in the world FLY the fastest and most technologically advanced wind-powered boats ever to sail? Not much.

These boats are more like aircraft, with 131 vertical feet of ‘wing”, and a waterline footprint that is larger than a basketball court.

The America’s Cup is the most famous yachting race, mainly thanks to its 162-year history, but also due to the eccentric and exuberant personalities that the race attracts.  This year, the 34th America’s Cup was held in San Francisco Bay, and it was the most suspenseful ever.  We were lucky to be there to share it with other fans from around the world, and for every moment of the 19 races [the longest in America’s Cup history] we have been on the edges of our seats.

Sailing in twin-hull catamarans that race at over 50 MPH, these boats have brought new sporting drama to the race, with speed and danger that has never before been tested. As if sailing were not already dangerous enough, the hydrofoils that help to stabilize the boats provide the only contact with water, allowing the hulls of these boats lift out of the water. It is no exaggeration that these AC72’s quite literally fly on water.

There were two capsizes [one of them tragically resulting in the death of British Sailor Andrew Simpson,] and one near capsize that reversed the momentum of the series. The US came back from seemingly impossible odds, after a 2-race penalty and subsequent trailing by 8-1 to win the series via seven contiguous wins.  This was not just a sporting event, it was one of the most remarkable comebacks in all of sporting history.

Never in its 162 year history has any America’s Cup team overcome such  an impossible deficit, but USA team captain Jimmy Spithill sailed eleven perfect races to defend the USA title.  Jubilant Larry Ellison, CEO of Oracle and team USA sponsor said: “it’s just too early to say where the next America’s Cup will be held“, but he joked that “it might be around Lanai” – the pristine Hawaiian island that Ellison purchased in 2012.  Wherever the race is held, we will be there three years from now to see if the US can once again defend against the best sailors in the world!

Big kudos to the sponsors of the 34th America’s Cup in San Francisco, everything was perfectly planned and orchestrated, from the ground at America’s Cup Village to Marina Green.