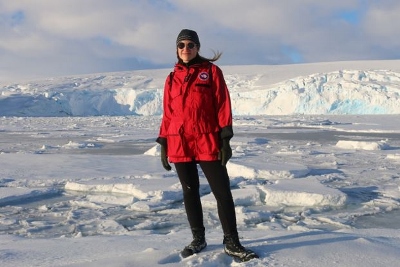 Recently I met Emmalina Glinskis, an environmental scientist, in Antarctica.  She’s a recent graduate from Columbia University with a degree in Environmental Science (CC ’17) currently working as a field scientist and technician at the U.S. Antarctic Program at Palmer Station.

I asked her a few questions and she highlighted her research efforts, findings, future plans and how each of us can make a difference on this planet in this Letter from Antarctica.

Her experience and focus is impressive!  Even more fascinating are the findings from her research. What are you doing in Antarctica?

I am helping out Dr. Hugh Ducklow from the Earth & Environmental Sciences department at Columbia studying the microbial communities of Western Antarctica.

My individual academic research was very different during my undergraduate career. I focused heavily on landscape ecology, which uses satellite imagery (remote sensing) and mapping methods to study and model ecological systems at the macro-scale. I focused my culminating thesis on mapping oil palm expansion in the Peruvian Amazon between smallholder farmers and industrial plantations in order to understand the main drivers of deforestation. I’m open to continuing academic research with a Master’s or PhD program, and love engaging with scientific research from all angles. What are your future professional plans?

But since I’m currently now out of school, I’m exploring other avenues to communicate science to broader audiences as I think about my next professional steps. I had an amazing opportunity to work with VICE News Tonight’s Climate Desk my last year of school, and I got really hooked on science/environment-focused media and journalism. I’m really passionate about communicating both scientific findings and the implications of contemporary environmental regulation to larger audiences through creative avenues of storytelling, whether it be through writing, photography, or production and film. You can view my current portfolio here. Photo:  Palmer Station’s sign, pointing to key areas important in the development of the US Antarctic Program such as the two other US bases (South Pole and McMurdo Station).

While I’m still interested in exploring science through research and field work around the world, I’m also spending time getting more journalism training as I continue into my post-graduate years. When I’m back in my native New York City in the 2018, I’ll be working as an editorial fellow for six months at The Nation, focusing on climate change coverage.

What are some the key insights from your time in Antarctica?

Being in Antarctica has been a true inspiration in understanding how landscapes react in real-time to human-induced warming, as this one of the most climate-vulnerable places in the world, warming by seven degrees Celsius over the past 50 years. To give some context, Western Antarctica is now warming at a rate five times higher than the global average temperature trends.

This warming means that the sea ice duration, which naturally fluxes during the winter and summer seasons, is sticking around for 100 fewer days since 1978. As a result, phytoplankton productivity, which provides a key role in absorbing carbon from the atmosphere into the oceans, is decreasing in parts of the northern peninsula region, and affecting all other levels in the ecosystem that depend on it to survive. Photo:  A group of Gentoos preparing to jump back into the bay outside Palmer Station against a backdrop of giant icebergs.

Adélie penguin (Pygoscelis adeliae) populations that depend on lower trophic level success have shown severe population declines of about 80% around Palmer, as they are beginning to be outcompeted by penguins from lower latitudes like Gentoo penguins (Pygoscelis papua).

Some scientists attribute these declines not only to climate change and sea ice loss, but the persistence of pollutants like DDT that can transport and condense in cold, high latitude areas. Ironically, while DDT has been banned (thanks in part to Rachel Carson’s famous environmental book Silent Spring), the glacier behind Palmer has been found to contain traces of DDT that may be entering and hurting the food web.

Land-based ice is melting too, which has a marked implication for sea-level rise. The Marr Ice Piedmont, the glacier behind our station, used to almost touch Palmer’s backyard when it was founded in the 1960s. Now it has retreated over 400 m, at a rate of 10 meters every year. I can hear the thunderous sound of it calving when I go out for hikes or skiing and boating trips—it’s a powerful roaring noise that really makes you think about what our human impact is costing us.

What has it been like to live/work at the U.S. Palmer Research Station?

Palmer is a hub of biodiversity—filled with numerous species of seabirds, penguins, whales, seals, fish and little zooplankton like krill. It is a big reason for the research I am doing as a member of the microbial component of the National Science Foundation’s LTER (or Long Term Ecological Research Station) here at Palmer Station. In the research group I’m part of at the Ducklow lab, we’re examining the heterotrophic bacterial production rates at the base level of the ecosystem here.  Bacteria in these oceans play a vital role in the carbon cycle, exporting organic matter (both dissolved and particulate) from other critters which is then stored in the deep ocean. In other words, the microbial loop in our oceans helps store carbon for many years, and determines the oceanic ecosystem response to the cycling of carbon under climate change.

While the effects of the microbial community due to recent warming are complicated, it is possible that decreasing ice and higher temperatures will lead to more light hitting ocean surface waters, which means more primary productivity (like algal blooms that we see here in the summertime). This will bring up the dissolved organic carbon values, ramping up bacterial production and routing carbon through this pathway at the expense of other food webs with larger organisms (think about the emaciated polar bear in the Arctic!). Thus we want to keep a close eye on how the carbon cycle may shift due to environmental change. Photo:  An elephant seal takes a nap on a boating ramp outside Palmer Station.

Why is the LTER Program important?

The LTER program exists all over the U.S. and Antarctica, and it has proven extremely valuable in these changing environmental times. No other dataset in the Western Antarctic has a completely uninterrupted time series of data on community ecology, allowing us to see the bigger picture of biological and climatological change in this vital area.  We go out sampling in the same locations biweekly, giving us a seasonal picture of ecosystem health since the project began in the early 90s. There’s also an important LTER cruise in Western Antarctica in January and February that gives us not only temporal consistency, but an important spatial context since the cruise performs science experiments along different transects as it moves down the peninsula.

How can readers get involved and help with this research?

Another aspect worth sharing about this place is the inspiring dedication towards the vital research being done down here.  I see it in each individual who works at Palmer Station. People should continue to support the National Science Foundation (NSF), which provides federal funding for these projects, NOAA, and any conservation organization focused on the Antarctic like the Polar Oceans Research Group based in Montana, lead by William Fraser. Their group is crucial in helping monitor much of the larger wildlife in this region, like seabirds and penguins. I hope the public keeps supporting science, especially climate change science, in these difficult political times. Science is based on learning through observation and experimental study, and builds its whole discipline on an intense vetting process of fact-based accuracy.

Citizens should stand up against political measures that aim to wipe out important climatological databases or reports based on words that might be seem unfavorable, yet stand to be strikingly true.

We should stand up for the aspiring academics, helping them keep their wages while studying under PhD programs rather than financially cutting away at an already challenging career path.  Projects like the LTER provide one of the most valuable toolsets to understanding how climate change has and will affect communities around the world. It is the first marker of an era of great change, and may hold the tools to innovate real solutions, politically and scientifically. Photo:  Sunset over Palmer Station as sea ice begins to move out of the bay in preparation for the austral summer

It is has been truly inspiring seeing how increasingly women are contributing to Antarctica over the years. While it was my first trip to the ice, I won’t forget the first time I saw one of the stairways at Palmer, which is covered in frames of every science and staff member who has spent the winter season at Palmer since the 60s. All men, for decades. Now, the “grantee” group that supports science while I was a Palmer was majority women, and the ratio of men to women on our total staff (support and science) is 2:1, which is exceptionally high.

As a woman, my experience at Palmer Station has been nothing but respectful and empowering. Every woman I have met here is incredibly hard-working, motivated, thoughtful, adventurous, and independent. We come from all over the US with a wide range of backgrounds—from professional diving in Hawaii, to kicking butt at women’s hockey in New York, to monitoring baboons in Africa—these ladies really rock.

My advice for young women who are itching to get down here—make connections with the researchers here in any way you can. I was lucky in that I knew my Principal Investigator as a mentor in my department at Columbia, but that doesn’t mean that is the only way. When you engage with science and scientists, you’ll find the world is really small, and those wild connections are not that far away. Remain interested and engaged, be friendly, help others, and they’ll help you get to where you’d like to be.

I’m not sure of mentorship programs for young women other than one that brought a whole group of aspiring female environmental researchers on a cruise last year. I believe the program was called Homeward Bound (feel free to google for more info). Their mission statement is “a groundbreaking leadership, strategic and science initiative and outreach for women, set against the backdrop of Antarctica”.

It launched in 2016, and sent 76 women from around the world with critical science backgrounds for a year-long leadership and networking program that culminated into an end of year expedition. Fun fact: it was the largest-ever female expedition to Antarctica in our history. This year’s cohort departs in February 2018, and they take applications every year from August to September. 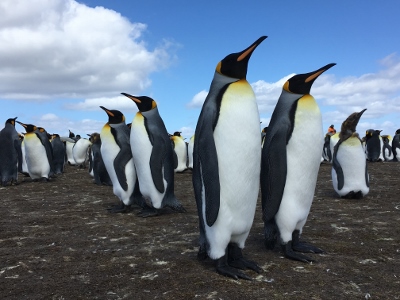 The King Penguins at Volunteer Point, Falkland Islands
Interested in planning your own customized adventure? Global Adventuress can help! Email us today!