A Day in Montevideo, Uruguay 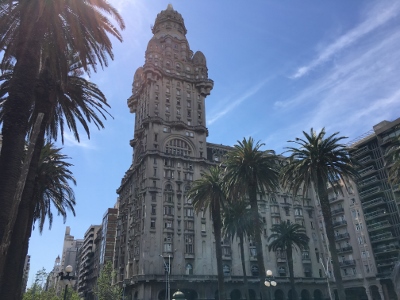 Montevideo is the southernmost cosmopolitan capital city in the Americas and the third most southern city in the world.  It’s situated on the southern coast of the country of Uruguay and on the northeastern bank of the Rio de la Plata (known as the River Plate). Founded by the Spanish in the early 18th century, there are many colonial architectural gems to admire in this tranquil city.  With a 14 mile sea promenade and nine beaches, we wish we could stay here longer than one day.

We spent a ½ day with Christine Dulin, Owner of Uruguay Auténtico to explore Montevideo and learn about Uruguay´s history, culture and traditions!  Email and book your tour:  click here Christine is a global citizen and married to a Uruguayan, but has family from the U.S.A. to Germany.  Her language skills are excellent and she speaks fluent Spanish, German & English.

In Uruguay, there are three things every citizen loves – beef, soccer and mate!  In fact there are 3 million citizens and 12 million cows, so plenty of beef to consume.

We met Christine at the Plaza Independencia to begin our tour at Palacio Salvo, once the tallest building in South America in 1928, and today the most iconic building in town. The Palacio Salvo has a fraternal twin brother in Buenos Aires, the Palacio Barolo. During our tour of ¨The Salvo¨ we visited the viewing deck on the 25th floor which gave us a great view (90°) over the historic center and the bay.  We also visited the roof top terrace for an open-air view and continued through the corridors of the historic building that was initially meant to function as a luxury hotel.  Nowadays, it mainly functions as a residential building and is home to more than 1,000 people, a true vertical neighborhood! Our next stop was the Plaza Matriz, a tree-lined square, then visited the cathedral of Montevideo.  We took an Uber to the ¨Mercado Agricola¨, a beautiful restored market hall. Christine introduced us to the ritual and etiquette of sipping “mate” — the Uruguayan national ¨coffee substitute¨. Mate, pronounced „ma-tay“ is a caffeine containing tea, that locals drink with a metal straw from a gourd – the tradition is also popular in Argentina and in the south of Brazil – however, most Uruguayos take it to the extreme and take their mate and thermos flask everywhere they go! Afterwards, we took an Uber to drive past the Centenario Soccer Stadium, where the first FIFA World Cup was held in 1930 – and won by the Uruguayan National Team.   Christine told us about the Uruguayos´ passion for soccer before we drove  to the Rambla, the 14 mile long promenade along the river Río de la Plata with several city beaches. We took a photo in front of the giant Montevideo Letters at Pocitos Beach.

When we returned to the port, there were more highlights to see including the Carnival Museum that offers insights into Uruguay´s unique carnival culture: Uruguay celebrates the longest Carnival Competition in the world.  Starting at the end of January, local carnival groups compete for more than 40 days in 5 different categories for the annual Carnival title! However, Christine noted not to expect a street carnival as in Brazil. The Uruguayan carnival competition is held in the evenings on small stages, the so-called ¨tablados¨, located throughout the city. And during two nights in February, the city vibrates to the rhythm of the candombe drums during the ¨llamadas¨, the drum parades. In the museum you will learn about the two most popular carnival categories: Candombe and Murga.

Before the end of the tour, we visited the Mercado del Puerto, the BBQ Mecca of Montevideo and a great place for a typical Uruguayan BBQ-lunch. Famous chef Anthony Bourdain went on a meat-binge at the Mercado in 2008!  Check out his program on youtube to get a first impression of Uruguay, click here.

Throughout the tour we learned about the progressive laws that Uruguay passed in the last years, their famous Uruguayan ex-president José ¨Pepe¨ Mujica and the Uruguayan passion for soccer and carnival. Christine also shared the ¨basics¨ such as the education and health system, cost of living etc. Check out this AirBnB apartment with one of the 4 small cupulas incorporated in the apartment, click here.  Another AirBnB cheaper option with a great view over the city and a private balcony, click here.

A video of the ¨llamadas¨, the drum parades that take place on 2 nights each February, click  here.

A link to this year´s winner in the category “Murga“, Don Timoteo:

Murga were the groups that criticized and made fun of society, politics and everything that happened during the last year, click here.

Some links to ¨murga-inspired¨ music:

Jaime Roos – One of the most famous Uruguayan artist – he also performed for many years in a murga group, click here and click here.

And here some further links that don´t have to do with carnival:

LA CUMPARSITA – One of the world´s most famous tangos from Uruguay!

This is the tango that was written by the Uruguayan Gerardo Matos Rodriguez and performed for the very first time in 1917 in the café ¨La Giralda¨ on the same block where the Palacio Salvo stands nowadays.

This is a very cool alternative version of the cumparsita that was recorded for its 100th anniversary, click here.

Global Adventuress would like to thank Christine Dulin of Uruguay Autentico for hosting our tour of Montevideo.  We highly recommend her!  She’s professional, fun and full of local knowledge and insights. 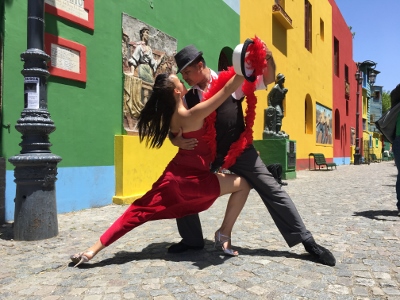 The Best of Buenos Aires

The Best of Buenos Aires
Interested in planning your own customized adventure? Global Adventuress can help! Email us today!