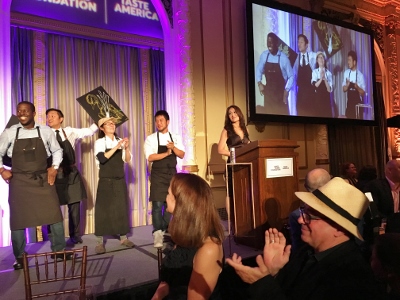 After we slurped the freshly shucked oysters from Penn Cove Shellfish, we moved to the next tasting station to relish hors d’oeuvres served by five local/regional James Beard Foundation (aka JBF) Chefs Taste America Event at the Fairmont Olympic Hotel.  There were almost 500 guests ready to indulge their tastebuds, delight in a night of culinary stars and support this Seattle benefit dinner. The Butter Poached-Shrimp with Sea Buckthorn Gel was next up.  Windstar Cruises Corporate Executive Chef Graeme Cockburn’s creation was inspired by his native Scottish coastline, where the sea buckthorn bright orange berries grow wild and artfully accented this dish. We dined with the team from Windstar Cruises, one of the Supporting Sponsors of the JBF Taste America Event.  We  met President John Delaney who told us that “Windstar is now setting sail as the Official Cruise Line of the James Beard Foundation.  It’s the perfect partnership, so cruise guests can savor epicurean experiences that are 180 degrees from ordinary.  These memorable meals are prepared with locally sourced ingredients by some of the most talented chefs and sommeliers in the world.” Mary Beth Wressell, Windstar’s VP of Marketing & PR continued to say, “Imagine dining on dishes created by a list of all-stars with the likes of Maxime Bilet (The Cooking Lab),  Evan Hanzcor (Egg), and Jose Mendin (Pubbelly Noodle Bar, Habitat, Baja Bao). Our themed cruises featuring James Beard Foundation chefs will be a foodie’s dream, with chef demos, special beverage pairings, and market tours. And guests can learn their secrets watching demos of their recipes while they cruise.” As dinner was served, we marveled at the parade of dishes presented to us.  The Host Chef Andrew Whiteside of Seattle’s Fairmont Olympic Hotel introduced his opening number, Woodford Reserve Bourbon-Cured Foie Gras Torchon, matched with Saldo Zinfandel 2016 from the Prisoner Wine Company.  Our second course was a Slow-Cooked Alaskan Halibut and Totten Inlet Mussels with Okra Stew, Einkorn, and Berbere Spice by the Headliner Chef Edouardo Jordan, a multiple James Beard Award Winner from Seattle’s Salare and JuneBaby, paired nicely with an Albarino 2017 from Maryhill Winery Otis Vineyard.  The third dish was created by James Beard Award Winners Stuart Brioza and Nicole Krasinski, from State Bird Provisions and The Progress of San Francisco – the Klingeman Farms Braised Pork with Salsa Roja y Verde and Jalapeno Refried Yellow Eye Beans complemented with a 2014 Cabernet Sauvignon from Robert Mondavi Winery in Oakville. Tonight was a feast for all senses and a night to celebrate the JBF Chefs!

SET SAIL ON A WINDSTAR CRUISE WITH THE JAMES BEARD FOUNDATION

We hope to continue on a culinary journey with Windstar Cruises and a James Beard Foundation Chef.

Food lovers can reserve their place on an upcoming cruises in 2018 and 2019 including Asia, Tahiti, Costa Rica, the Caribbean or the Western Coast of North America.  Take a look at this complete lineup of Windstar’s culinary collection cruises at this link, click here!

Here are a few to consider….
NOVEMBER 26, 2018 TAHITI & THE TUAMOTU ISLANDS with Chef Emily Luchetti
With six cookbooks to her credit and numerous awards, Emily Luchetti has helped to define what great pastry in America means. As chief pastry officer for Big Night Restaurant Group, she oversees the pastry operations for The Cavalier, Marlowe, Petit Marlowe, Leo’s Oyster Bar, and Park Tavern Restaurant. She was awarded the 2004 James Beard Foundation Award for Outstanding Pastry Chef and was inducted into the James Beard Foundation Who’s Who of Food & Beverage in America. With a passion for vanilla, she can’t wait to bake treats made with vanilla fresh from the islands and plans to escort guests on excursions to local vanilla farms.
NOVEMBER 26, 2018 TAHITI & THE TUAMOTU ISLANDS with Beverage Expert Shelley Lindgren
Owner and Wine Director Shelley Lindgren of A16 and SPQR in San Francisco, was honored by the James Beard Foundation in 2015 with the Outstanding Wine Program award for her work at A16. Her reputation for seeking out Italian wines made with lesser-known grapes has earned her recognition as a wine pioneer. She continues to search for evocative wines from around the world and plans to serve interesting pairings aboard Wind Spirit in Tahiti.
DECEMBER 15, 2018 WINDWARD ISLANDS SURF & SUNSETS with Chef Jose Mendin
Chef/restaurateur José Mendin co-founded and created the Pubbelly Boys restaurant group and the Comma Hospitality Group (FCHG), with notable Miami restaurants such as Habitat, Pubbelly Noodle Bar, Pubbelly Sushi, Baja Bao, and PB Ysla in Mendin’s hometown of San Juan, Puerto Rico. Mendin will be returning home on this cruise, which is a roundtrip journey from San Juan, bringing his ability to revitalize and re-imagine ancient and traditional recipes by maintaining the integrity of a dish’s roots while infusing it with modern touches. He earned James Beard Foundation nominations for “Best Chef: South” from 2012 to 2016. He looks forward to showcasing his love for big flavors aboard Windstar and sharing his favorite restaurants and flavors with guests in San Juan.
JANUARY 5, 2019 WINTER ANTILLES ESCAPE Chef Danielle Leoni
Hailed as one of the top innovative chefs of the Valley, Executive Chef Danielle Leoni has lived up to that distinction with an avant-garde approach to blending Arizona farm-fresh ingredients with the tropical traditions of Jamaica. Under her stewardship, in 2008 The Breadfruit and Rum Bar introduced an entirely new cuisine to Arizona while redefining perceptions of tropical dining. Chef Leoni has spent over a decade exploring the islands of the Caribbean and immersing herself in local food cultures. Her passion for sustainable change within our food system from land to sea has brought her national recognition.  She is an ardent supporter of the Arizona farming community, ocean conservation, seafood sustainability, zero waste and is dedicated to cultivating the next crop of culinary talent.

Go wine tasting in Sonoma and Oregon’s Willamette Valley. Take a cable car to lunch in San Francisco’s Chinatown and taste wild California sardines at Monterey’s famous Cannery Row. From food trucks to fine dining, farmers’ markets to cooking classes that put you at the heart of the action, this is a cruise for people who have a taste for life and a thirst for adventure.

Mary Schimmelman, Windstar’s Director of Public Relations & Social Media highlighted “We are thrilled to add this 2019 cruise to the Windstar Culinary Cruise Collection, hosted by a West Coast JBF Chef.  The cruise will start in Vancouver stopping in Seattle, Portland and sail up the Columbia River, then continue south to Sausalito, San Francisco and San Diego.” Click here to learn more about the JAMES BEARD FOUNDATION.

The JBF Scholarship Program is one of the educational pillars of the James Beard Foundation and is essential to the Foundation’s mission.  Since its inception in 1991, the program has awarded over $7 million in financial aid to a diverse group of promising, aspiring culinarians. Click here if you would like to donate. 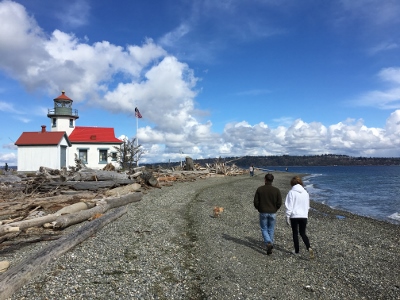