It was great to have the transit hotel to rest and shower given our long layover in Bangkok. But note there are two of them – at opposite ends of the airport. We went to the wrong one first and had to walk all the way back.

We used Diethelm Travel  http://www.diethelmtravel.com/laos/Pages/home.aspx for Laos. We have used them before and I highly recommend them. They suggest great hotels and tours and excellent guides. The only push back is they try to over book you – not leave enough time just to wander. So just make sure you build that into your schedule. And if you need a lot of handholding, they can provide that as well.

Phonesavanh is a newer town and capital of Xieng Khuang Province. The old capital was heavily bombed so they moved the capital here. The region is very prosperous relative to much of Laos. While the soil is not that fertile, it makes great bricks. There are also quarries and now quite a bit of tourism. Companies are privately owned and pay taxes, even though the country is communist. They are able to get only one rice harvest in this area, but if you go to lower elevation, they get two harvests. They do grow lots of vegetables and raise animals.

Lao Sericulture Company silk and tea farm – this farm teaches rural women how to grow mulberries for silk worms, and how to make silk from spinning to making all natural dyes to weaving. Their silk scarves and hangings were beautiful. They had trained about 3000 women who then took the skills back to their villages. It was definitely worth a visit even if you have seen silk manufacturing before.

Phonesavanh market was fun to walk around. We saw all sorts of food and goods including “rice rats” some kind of large rodent they eat to tools made from left over ordnance.

MAG—Mines Advisory Group – shows a 45 -minute movie about the bombing of Laos. To say it is moving is an understatement. We felt outrage, sorrow, shame. I strongly recommend taking the time to see this. It is right near the market.

Plain of Jars, a large area around Phonesavanh where several hundred huge jars of unknown origin are scattered (site 1 features 250 jars weighing from 600 kg to one ton and site 2 features some 90 jars). Jars are 2000-3000 years old. Gut wrenching are the craters from bombs, trenches dug for soldiers, and bullet holes in the jars at site 1. This was a battleground during the Vietnamese war with soldiers using the jars for hide behind and nearby caves to live in. The immediate land near the jars has been cleared of bombs but it is very dangerous to go out of the designated area. Site 2 jars are larger but there are fewer of them.

Muang Khoune, the former capital of Xieng Khuang Province. Saw famous Wat Phia Wat temple which had been sacked by Thai, French, and then bombed during the war.

We visited several villages. One we saw them making rice noodles, another making bricks, a third making the local “moonshine” Lao-Lao.  Ask your guide.

We drove from Phonesavanh to Luang Prabang. It took about 7 hours with stops. We stopped to see people making Lao Lao the local moonshine/whiskey. We also stopped in a Hmong Village, a Khamou village, and the village where the PDR was born. It was a beautiful trip if a bit bumpy and I think worth the time.

This hotel was lovely and only two years old. The rooms were spacious, clean, and nicely appointed. The beds were heaven after the ones in Phonesavanh. We ate dinner here once as well as breakfast and the food was good. The hotel is about one mile from town. This is good in that it had a beautiful view. The downside is you can’t just leave your hotel and walk around. However, they had a shuttle and took us to town when we wanted and then had a number to call to pick us up. The manager and the staff were friendly, helpful. We had a couple massages which were great. The pool was lovely. They had a fitness center with a little equipment.

Best was that we took a cooking class with Chef Roberto. He first took us to the Phosy market which is the largest local market, showed us local food, and told us about all the things we had never seen before. Great fun were dried mushroom chips. Think potato or banana chips but made of mushrooms and with lime and chili. Delicious. We made a five-course meal and then ate it for lunch. He gave us the recipes so we can make at home. This was very fun. Another restaurant in town called Tamarind is supposed to have cooking classes as well.

Bike Ride, Pak Ou Caves, and Mekong Boat Ride We rented mountain bikes and rode about 20 miles through several small villages up the Mekong across the river from Pak Ou Caves. The ride was fun, only a little bit in traffic. Not hard if you are in good shape but challenging if you are not. Half on paved roads and half on dirt roads. We had lunch and then took a boat to see the caves which are amazing and filled with thousands of ancient Buddha statues. We then took the boat back to Luang Prabang, rode about 5 minutes to drop off the bikes, and then back home. Highly recommend this. You see everything differently on a bike and it was lovely to get some really good exercise.

Shangri-Lao Explorer Camp.  This is an elephant camp. At the camp, we got to feed the elephants. We learned that these are all domesticated elephants that used to be used for timber work. Now there is not any timber work and they are rescuing them by turning them into a tourist destination. We liked that aspect. And the elephants seemed very well treated – no sores or cuts or anything. We took about a 90 minute elephant ride into the jungle. It was a very pleasant way to see the jungle and we got to sit on the elephants’ heads like mahouts which was fun. After a lunch in the jungle, we hiked back to the Khan River for about an hour. Not a difficult hike but lovely. We then got into a small boat which took us to the Tad Sae Waterfall which is a beautiful, large waterfall over natural limestone. We took a swim in the brisk water – good to wash off the sweat from the hike. Then we got on the boat and returned to the elephant camp – about a 30 minute ride. I definitely recommend the waterfall and the trek. I think there are probably better treks if you are in good shape and you should inquire about them. The elephant ride was fun but not essential, touristy but then a good way to rescue the elephants. The area at the waterfall was also touristy but still nice. We liked seeing the jungle.

We began the day watching the old tradition of alms giving to the monks at sunrise. Definitely worth rising early to see this. We then went to a nearby local morning market – fun to see but going to the market with the chef was more of a highlight because he told us what we were seeing. Then we visited the following temples: Vat Xieng Thong, Vat Visoun, Vat Sene, and Vat Aham. Back at home for a siesta and then at dusk walked up Mount Phousi to see the sunset which was beautiful.

We went to see a dinner show at Roots & Leaves  Lao restaurant. Food was mediocre and expensive but we did like seeing some traditional dance. Not sure I would recommend this. 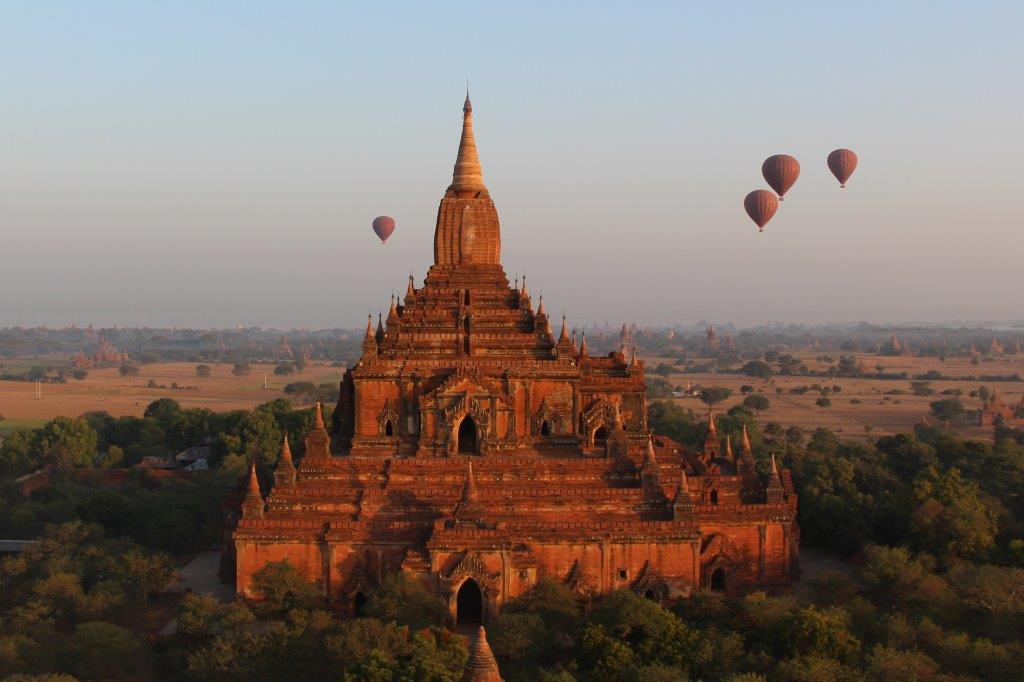 Reflections on Myanmar (Burma)
Interested in planning your own customized adventure? Global Adventuress can help! Email us today!