Bonefishing in the Bahamas 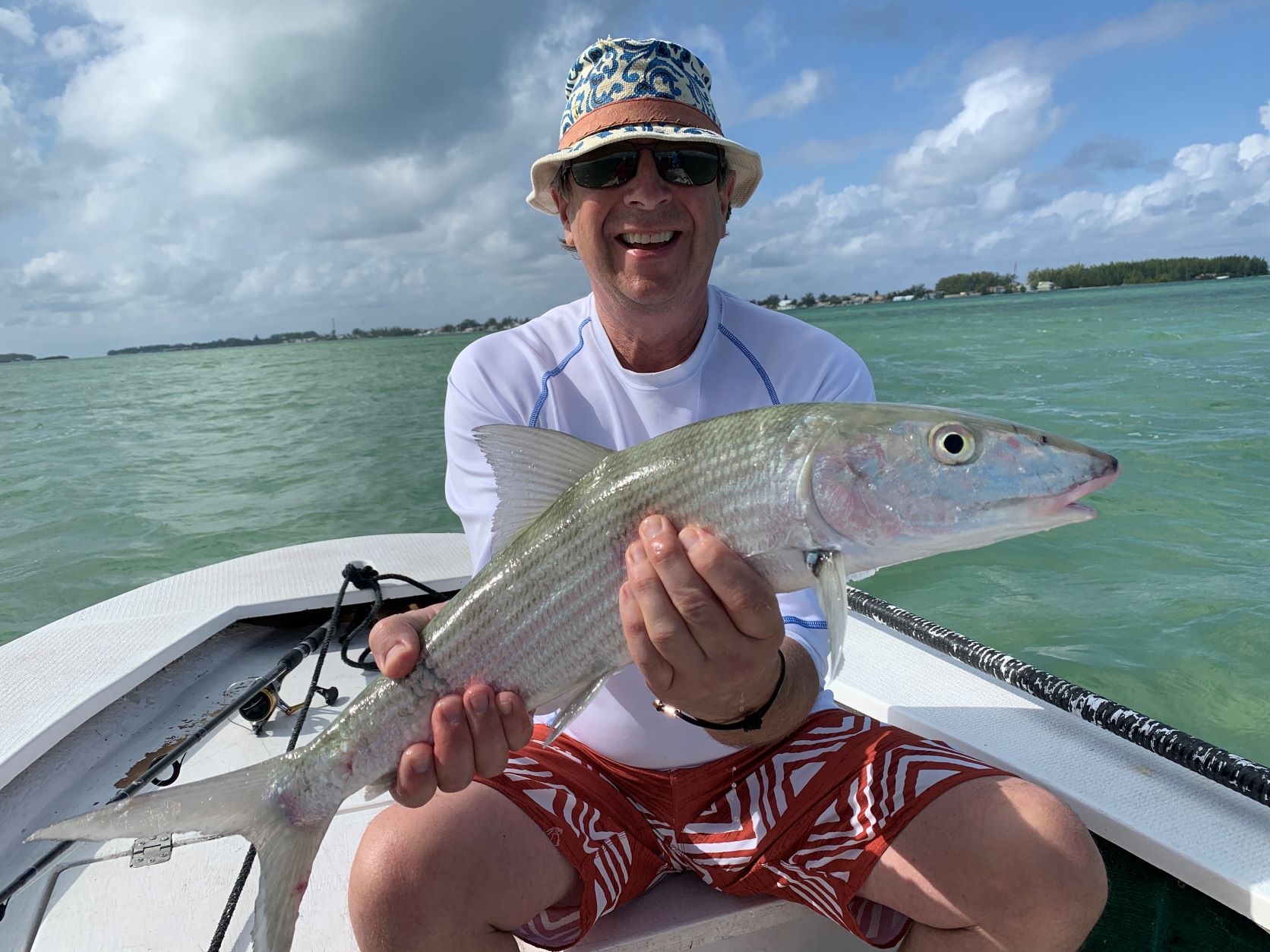 “If you look at the bottom where there’s mud, that’s where the bonefish are. They like to eat the worms and shrimp and crab,” noted Fred, our 71 years young guide, a native of Bimini. “You see, right now the tide is coming in, so the fish are feedin, so get ready.”

It was our first time bonefishing, and we heard The Bahamas was one of the top destinations in the world to reel in a bonefish. With more than 700 islands in the archipelago surrounded by mud flats, there was a good chance we would find some. From Bimini Bay, we hopped aboard a 22 ft. fishing skiff and motored out to the middle of the Bay with one of the best bonefishing guides in the Bahamas, “Eagle Eye Fred“ as many locals call him. We noticed there were areas with mangroves, and plenty of sand bottomed flats that create the perfect environment for bonefish.

He called out, “Pound for pound, they are the strongest fish in the sea. No other fish can pull like a bonefish.” Our anticipation mounted, and my husband Gary stepped up onto the the bow to cast his first line straight ahead of us, where Fred said the bonefish were feeding.

“Ok, that’s good, you’re in the mud now and the tide is comin’ in, running north, so they be feeding north. Once they find it, they just pick it up and run with it,” shared Fred as he continued to instruct us with the top tips for bonefishing.

Fred is down-to-earth and friendly. He grew up bonefishing and noted these three tips for bonefishing that he learned from his father, handed down from his Bahamian lineage.

Seems so simple, yet a trained eye like Fred has, can spot bonefish that most can’t see. Fred had plenty of experience, so we were confident we would find some soon.

Gary felt a tug and knew it was a bonefish. Fred said you’ll know when they take a bite of your bait, and then added, “now set it, then let em run with it til they stop, then you reel and stop, reel and stop.” After it took off, the struggle started. It was hard enough to hang on to the pole while the fish started to run, and then it was even more difficult to reel it in. After a couple minutes, I heard Gary start to moan and groan while clutching onto the pole. The bonefish was putting up a fight, while Fred kept coaching Gary to hang in there. Finally, Gary landed an eight lb. bonefish, and came face to face with his catch. After a few seconds, he released this fighter back into the waters.

The Bahamas are known for having some of the largest bonefish, and the record bonefish caught to date was 16 lbs., 2 oz. It took a bonefishing guide one hour to bring it in!

After all the effort to bring in the bonefish, for me it was hard to release and put it back in the water. But, Gary reminded me this is the ritual of catch and release. Before long, we had our line back in the water and Gary felt a tug from the next bonefish, then let it make a long run, and another wrestling match began.

The Bahamas should be on every saltwater angler’s fishing list, especially if they are looking for bonefish. Lots of challenging places to spot bonefish and chase them. A great exercise for seasoned veterans to test their skills and for beginners to learn new ones.

Warning: This adventure will test your strength and your patience.

Adventures in Pakistan
Interested in planning your own customized adventure? Global Adventuress can help! Email us today!