My Adventures in Tibet 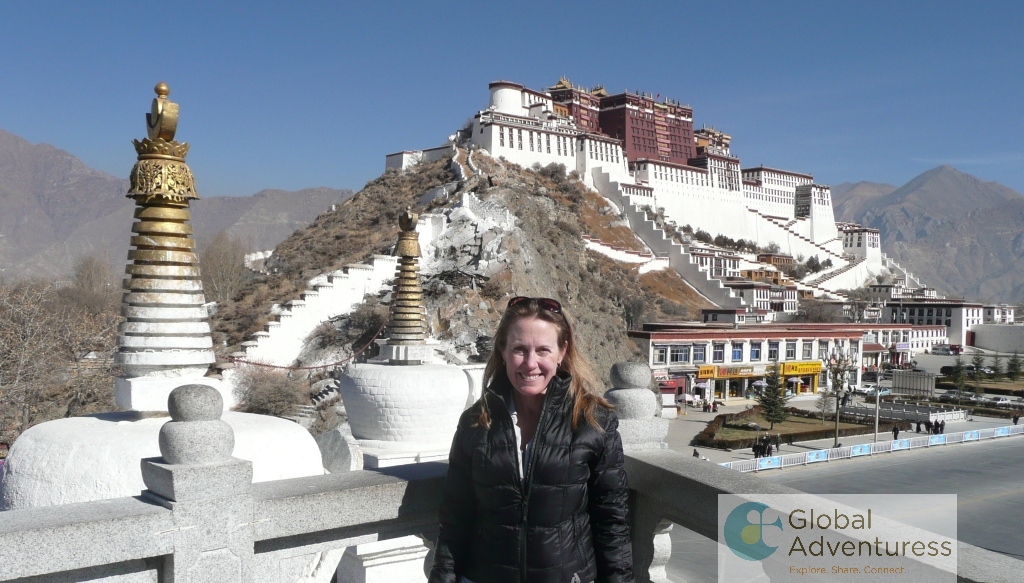 From Nepal, I flew over Mt. Everest and the Himalayas to the Southwest of China, and landed in the high plains of the Qinghai-Tibet Plateau. Sunny blue skies didn’t keep the December chill away and the air was so dry, my mouth felt like it was full of cottonballs and I suddenly got static hair.

I was greeted by my guide “Big Dawa” who told me I arrived into Tibet just in time for the annual holy pilgramage. Every year, in December, after the barley harvest, nomadic Tibetan tribes journey hundreds of miles over the brown hills and barren landscape to Lhasa.  They come to pay respect to the sacred Jokhang Temple, built almost 1,500 years ago in 642, and listed as an UNESCO World Heritage site.

Some Tibetans travel by foot from the far corners of Tibet – Amdo and Kham, to get to Lhasa.

Each step, devout Tibetans bow down and make reverent prostrations, leading all the way to the steps of the the sacred Buddhist Temple.

Once they arrive to this pilgrimage destination, they circle the Temple for hours with their prayer wheels and continue to practice their prostrations in front of the Temple, while chanting, holding prayer beads, burning juniper incense and lighting candles with yak butter or ghee oil.  The Tibetan pilgrams stop to visit the Potola Palace, with tiers of 1,000 rooms, also known as the Winter Palace of the Dalai Lama since the 17th century. The Tibetans, young and old, were dressed in their traditional colorful costumes from head to toe with heavy sheepskin coats trimmed with fox fur, silk brocade and tied at the waist with huge ornamented belts.  Their dress is laden with amulets, silver necklaces, with coral and turquoise stones decorating their long black braided hair. I felt underdressed, but warm bundled up in my ExOfficio down jacket.

During my early December visit, I only met one other Westerner, Simon, a talented photographer from London, who had just returned from a few days driving up to basecamp at Mt. Everest.  Evidently, this is not the peak season to travel to Tibet, however after witnessing the devotion of the Tibetans throughout their pilgrimage, I believe this is one of the best times to visit and experience the great Tibet culture!