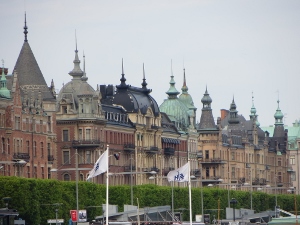 Captain Larsen announced we would be cruising through some of the almost 30,000 islands that make up the Swedish archipelago about 3 AM, as we made our way towards Stockholm. Not wanting to miss out, I set the alarm to wake up my cruise mates. We bundled up in Seabourn’s plush white robes, and headed to the top deck to see the ship navigate many of the outer islands of Sweden. It was as light as mid-day. We saw some uninhabited islands, but most had Falon red summer cottages, and all manner of boats on them.  The Swedes seem to love the water, and think nothing of living a few islands away from the center of activity.  Island after island, we watched with wonder. There was even a sailboat out in the middle of the early morning hours. We heard that during the winter there is a skating race from island to island.

Sweden is 1/3 water, 1/3 canals and harbors, and 1/3 land. We approached Stockholm which is made up of 14 islands linked together by bridges. We stepped off our Seabourn cruise ship, and caught a taxi into town.

Our driver explained that we arrived just in time for the National Holiday festivities!  Swedes celebrate their National Day in honor of King Gustav Vasa’s election in 1523, and the country’s 1809 constitution – both events took place on June 6th. Many dress in traditional Swedish outfits, many waving the Swedish flag, many celebrating.  Before the day was out, we were able to watch the Royal parade–streets thronged with people cheering.

We met our local guide, Carin, and saw as many of the city’s highlights in 24 hours. Here are our recommendations on what to see & do, where to stay & dine, how to get around. Starting with the

Top Things to do in Stockholm We felt lucky to visit Stockholm on National Day!  Lots of families, friends of all ages walking about in Stockholm, celebrating together.  More than 50 bands or musical groups playing in various town corners.  We stopped to watch an older group of musicians dressed in traditional clothing with accordions, guitars, mandolins.  We saw the Royal band, the Royal horses and Royal family riding in a carriage–children waving flags. What a great day for this country and its people! Many refer to the Grand Hotel as Sweden’s finest hotel, where guests receive outstanding hospitality. Our rooms at the Grand Hotel were “GRAND”, spacious, similar to a 2 bedroom apartment with a balcony and deck.   We watched the harbor activity, and looked out to the Royal Palace to see the National Day Festivities. Ideal location to stay in Stockholm and central to everything as you hit the top things to do in Stockholm! As part our things to do in Stockholm list here is our favorite place to eat! The Veranda Located on the main floor of the Grand Hotel, The Veranda is a favorite place to dine for locals and tourists. We dined here twice, and enjoyed the views of the waterfront and the Royal Palace. We dined on their legendary Swedish Smörgåsbord, where you can choose from a variety of 100 dishes like Swedish meatballs, a variety of healthy salads, and numerous desserts. The next morning, the traditional Swedish breakfast presented more options – fresh vegetables and fruit, yogurts, cream of wheat/oatmeal, pastries, or salmon, herring, caviar, sausages, cheeses and crackers. Don’t miss! The pumpernickel bread is delicious.

Limos 4 Stockholm provides airport transfers, sightseeing and other transportation service in and around Stockholm or anywhere in Sweden. They provide excellent service and a fleet of cars to choose from: business & luxury – sedans, stretch limos, minivans, buses. Global Adventuress would like to thank Grand Hotel Stockholm for hosting our dinner, and Limos 4 Stockholm for our airport transfer, and the Stockholm Office of Tourism for guiding a tour.

We also would thank Travelpro for the carry-on spinner suitcase, a favorite of travel crews and avid travelers, as well as DK Travel for the Top 10 Stockholm travel guide. Stockholm Tourism Office: To help you plan your travels to Stockholm and the surrounding area, visit this site. 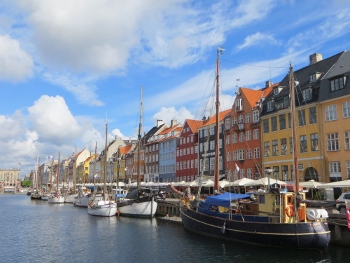 Top Picks for Copenhagen
Interested in planning your own customized adventure? Global Adventuress can help! Email us today!