The Art Islands of Japan 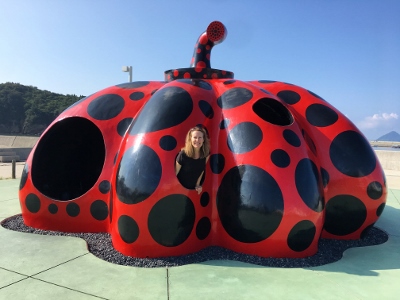 The Art Islands of Japan are located in the Seto Inland Sea and fast becoming an art destination.  Known for its contemporary art and museums, there are several artworks to enjoy including Yayoi Kusama’s iconic pumpkin sculptures, paintings and installations by Claude Monet, James Turrell, and Walter De Maria, as well as structures by Pritzker Prize-winning architect Tadao Ando. The Benesse Corporation oversees the island’s art museums, installations and sculptures on these islands.  In fact the Benesse Prize was established at the Venice Biennale, where winners were commissioned to create artwork for Benesse on the islands of Naoshima, Teshima and Inujima. The main art island is Naoshima (直島) with the Lee Ufan Museum, Chichu Museum, the Benesse House, and the many modern art galleries that are inside traditional Japanese homes, known as the Art House Project near the Honmura Port.  This small island is an art mecca and visitors from around the world are coming to see the magnificent art, unusual architecture.  The art and architecture with the natural landscape complement each other.  Depending on the time of day, your art experience can be dramatically different with the changes of light, sound and space. We asked visitors what one word stood out for them from their art experiences on these islands and they shared shocking, surreal, whimsical, transcendental and spectacular. While at the Chichu Museum, we entered James Turrell’s Open Field and Open Sky installations and found them mind altering, leading us into a contemplation of space and time.

The vast open room showcases Claude Monet’s large canvas of pink lilies surrounded by thousands of tiny white tiles.  The architectural space changes the way you see the art with a  large skylight that brightens the quiet room.

At the Minamidera near Honmura where the building was designed by Tadao Ando to house James Turrell Back Side of the Moon one of the most fascinating sensorial art experiences.  A limited number of people are allowed into this exhibit, so be sure to get your ticket as soon as you arrive to Honmura or you might have to wait an hour or two.  You’ll be full of wonder during 15 minutes of a total black out that emerges into surprising images as your eyes adjust to the darkness. Yayoi Kusama’s pumpkins are some of the main attractions on Naoshima – the yellow pumpkin is located near Benesse House, and the red pumpkin is at the Miyanoura Port.

NOTE:  The following information is shared by Benesse House.  Be sure to check their website to confirm opening days and hours (some holidays museums are closed).

Naoshima Bath:  This is an art facility created by artist Shinro Ohtake where visitors are actually able to take a bath. “I♥︎湯” was created to provide both a place for Naoshima residents to rejuvenate and as a venue for exchanges between Japanese and international visitors and locals to take place. The exterior and fittings of the bathhouse, from the bath itself to the pictures decorating the walls, the mosaics, and even the toilet fittings, all reflect the universe of the artist.  The bathhouse is operated by the Town-Naoshima Tourism Association. Come visit and soak in the tub, and experience art with your entire body. Benesse House:  Benesse House Museum opened in 1992 as a facility integrating a museum with a hotel, based on the concept of “coexistence of nature, art and architecture.” Designed by Tadao Ando, the facility is built on high ground overlooking the Seto Inland Sea and features large apertures that serve to open up the interior to the splendid natural surroundings. In addition to exhibiting the painting, sculpture, photography, and installations in its collection, the Museum also contains permanent site-specific installations that artists have created especially for the building, selecting locations on their own and designing the works for those spaces. The Museum’s artworks are found not just within its galleries, but in all parts of the building, as well as in scattered locations along the seashore that borders the complex and in the nearby forest. Benesse House Museum is truly a rare site where nature, art, and architecture come together, in an environment containing numerous site-specific works created for the natural environs of Naoshima or inspired by the architectural spaces they inhabit. Chichu Art Museum was constructed in 2004 as a site rethinking the relationship between nature and people. The museum was built mostly underground to avoid affecting the beautiful natural scenery of the Seto Inland sea. Artworks by Claude Monet, James Turrell, and Walter De Maria are on permanent display in this building designed by Tadao Ando. Despite being primarily subterranean, the museum lets in an abundance of natural light that changes the appearance of the artworks and the ambience of the space itself with the passage of time, throughout the day and all along the four seasons of the year.

Taking form as the artists and architect bounced ideas off each other, the museum in its entirety can be seen as a very large site-specific artwork.

A museum resulting from the collaboration between internationally acclaimed artist Lee Ufan, presently based mainly in Europe, and architect Tadao Ando.

The Ando-designed semi-underground structure houses paintings and sculptures by Lee spanning a period from the 1970s to the present day. Lee’s works resonate with Ando’s architecture, giving visitors an impression of both stillness and dynamism. Located in a gentle valley surrounded by hills and the ocean, the museum offers a tranquil space where nature, architecture and art come in resonance with each other, inviting to peaceful and quiet contemplation, in a society overflowing with material goods.

Ando Museum:  A Tadao Ando-designed inner space, framed by unadorned concrete walls, infuses new life in this about 100-year-old traditional wooden house in Honmura. Here, contrasting elements of past/present, wood/concrete, light/shadow overlap in this space which condenses the essence of Tadao Ando’s architecture. Learn about Ando’s work and Naoshima history through photographs, sketches, and models, and see how the museum itself has revived this venerable old house.

Art House Project in Honmura (six art houses):  The Art House Project is an art project underway in Naoshima’s Honmura district. It began in 1998 with Kadoya, and currently comprises seven locations: Kadoya, Minamidera, Kinza, Go’o Shrine, Ishibashi, Gokaisho, and Haisha. In this project, artists take empty houses scattered about residential areas and turn the spaces themselves into works of art, weaving in history and memories of the period when the buildings were lived in and used. Going from one of the houses to another, visitors pass through the Honmura district, where everyday life unfolds around them, in the process not only engaging with works of art, but also sensing the layers of time and history interwoven in the community and the fabric of local people’s lives. A notable feature of the Art House Project is that because viewing it means traversing a zone of daily life, it acts as a catalyst for interaction between visitors and local residents, giving rise to many a memorable episode. A truly organic project that changes day-to-day, it has evolved to present a new model of community, characterized by positive interaction between urban and rural, young and old, resident and visitor. Teshima Art Museum:  Uniting the creative visions of artist Rei Naito and architect Ryue Nishizawa, Teshima Art Museum stands on a hill on the island of Teshima overlooking the Seto Inland Sea. The museum, which resembles a water droplet at the moment of landing, is located in the corner of a rice terrace that was restored in collaboration with local residents. Structurally, the building consists of a concrete shell, devoid of pillars, covering a space 40 by 60 meters and with a maximum height of 4.5 meters. Two oval openings in the shell allow wind, sounds, and light of the world outside into this organic space where nature and architecture intimately interconnect. In the interior space, water continuously springs from the ground in a day long motion. This setting, in which nature, art and architecture come together with such limitless harmony, conjures an infinite array of impressions with the passage of seasons and the flow of time.

We stayed at the Benesse House Museum which is a combined hotel and museum where contemporary art is displayed. There are several different buildings where you can stay, including the Benesse House Oval, Park, Beach and Museum buildings).  Each building has different art collections and it’s like you’re sleeping in a modern art gallery.

Good to note:  we found staying at Benesse House very helpful with our transportation and schedule planning.  Also, Benesse House offers a free shuttle bus to the Lee Ufan Museum, Chichu Art Museum, and runs guests between the Honmura Port and Miyanoura Port.

Other options — if you don’t want to stay at Benesse House, guests can find lodging at small inns and some islanders offer guests lodging in their homes.  Also there are island shuttle buses with Yayoi’s pumpkin design that take visitors around the island. How to Get There?

We took the Shinkansen JR “bullet train” from Tokyo to the Okayama Station.  The Japan Guide notes that Tokyo and Okayama are two major stations along the JR Tokaido/Sanyo Shinkansen. The one way trip costs around 17,000 yen and takes approximately 3.5 hours by Nozomi train or 4 hours by Hikari train. The trip is fully covered by the Japan Rail Pass, if done by Hikari, but it is not covered if done by Nozomi.

From Okayama, we took the regional train from Chayamachi to Uno.  From Uno Port, take the ferry to Naoshima. Be sure to check train, ferry and shuttle bus schedules to avoid long delays and lines. 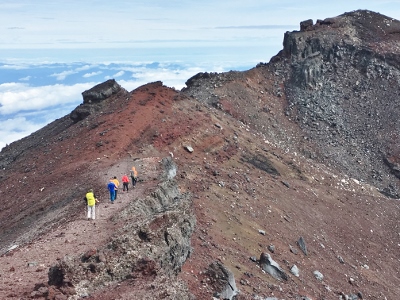 To the Top of Mt. Fuji!
Interested in planning your own customized adventure? Global Adventuress can help! Email us today!