The Grand Dame of San Francisco 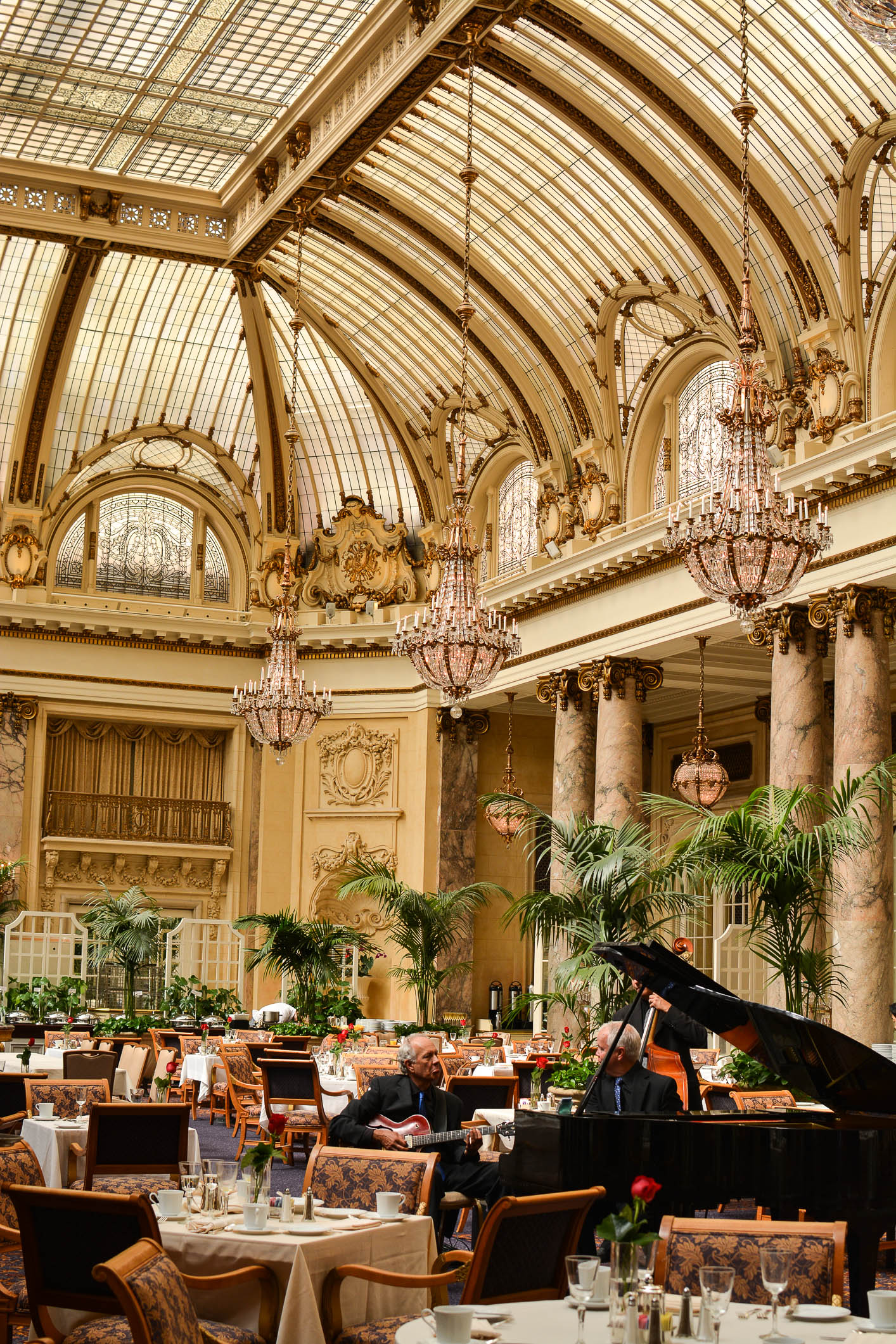 by Julie Biniasz, a Travel Writer based in Seattle

A hotel “without a counterpart in the world” is how the palatial Palace Hotel was described when originally built.  In 1875, the Palace Hotel opened its’ doors and ever since, hotel guests and locals tell stories and memories shared in this Beaux Arts beauty – hotel stays, dinner parties, celebrations, engagements, weddings and more!

Photo compliments of The Palace Hotel

Lovingly restored to its original resplendent condition in 1991, this historic landmark is located in the heart of San Francisco.  Occupying an entire city block, this elegant hotel with gleaming polished marble floors and luxurious accoutrement is a cable car away from Union Square, the Financial District, the waterfalls of Yerba Buena Gardens, and the Museum of Modern Art.  It’s a central place to stay and explore the city – Fisherman’s Wharf, Golden Gate Bridge, Alcatraz, and 12 other things The Palace Hotel recommends to do.

With 553 guest rooms and spacious suites, hotel guests experience a regal stay on a grand scale.  After the turn of two centuries, the Palace Hotel is still to this day one of the largest in the Western United States, and considered one of the top luxury hotels in the World.  The hotel is currently part of Starwood’s Luxury Collection and as expected, our stay here was nothing less than perfect.

Inside the Palatial and Stunningly Beautiful  The Garden Court Restaurant

When originally constructed, the light-drenched and sky-lit center of the building featured an elegant grand court and carriage entrance, which was open to seven stories of marble columned balconies that overlooked the court.  When the hotel reopened in 1909 The Garden Court as we see it today was unveiled.  You can enjoy brunch, afternoon tea and other meals under the iconic stained glass dome.  It is truly one of the most beautiful and renowned restaurants in all of San Francisco.  We savored the most delicious Eggs Benedict on Planet Earth, along with fresh squeezed juice and gourmet coffee.  Absolutely delicious; and very reasonably priced relative to the excellent quality.  Even movies have been filmed here, including the finale of The Game, a 1997 movie starring Michael Douglas.

The Pied Piper of Hamelin Painting

Only a few steps away from The Garden Court and just down the gleaming marble-floored esplanade, The Pied Piper Bar is another San Francisco institution, known for its outstanding cocktails and a Maxfield Parrish original painting that is valued at $3-5 million.  The painting was on its way to the auction block at Christies in March of 2013, when the city of San Francisco went up in arms.  The Palace Hotel acquiesced to popular demand, and restored the painting to its beloved location above the bar.  We enjoyed an absolutely perfectly constructed shaken martini and a Greyhound made with fresh squeezed juice, while listening to live jazz/swing music from the lounge.  It was delightful.

The staff at the Palace made every moment of our stay enjoyable.  When we decided to go to Napa Valley on a moments’ notice, the concierge had a rental car delivered directly to the hotel in a matter of minutes.  We particularly enjoyed the tall ceilings, the perfect condition of everything in the rooms, the very friendly and attentive five-star staff, great food and drink, and a wonderful ambience.  This Grande Dame will be our new home away from home when traveling in the San Francisco Bay Area.

Thank you to The Palace Hotel in San Francisco for partially hosting our stay! 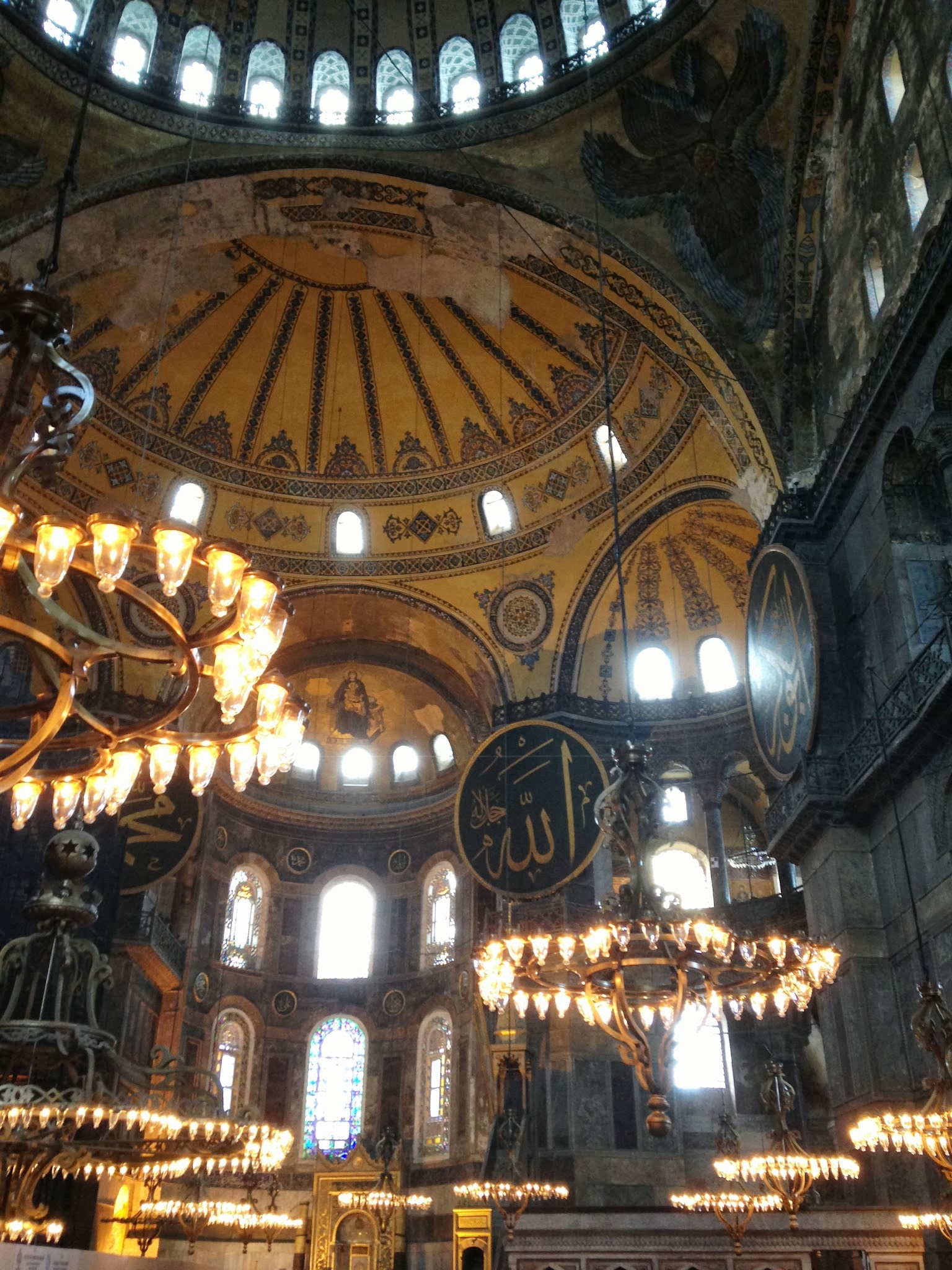 East Meets West in Istanbul
Interested in planning your own customized adventure? Global Adventuress can help! Email us today!