Book Reco: Men of Salt – Crossing the Sahara on the Caravan of White Gold 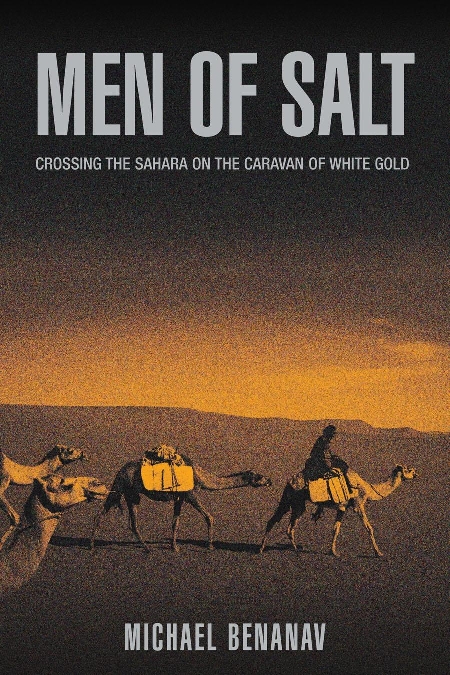 Before we left for Timbuktu, we read Michael Benanav’s book, Men of Salt: Crossing the Sahara on the Caravan of White Gold, a journal about the author’s 40 day crossing the Sahara on camel through the Tanezrouft region to get to the salt mines of Taoudenni, Mali.  After reading the book, we realized Timbuktu wasn’t as remote as Taoudenni.  Taoudenni is one of the most desolate places on earth.

Michael joined the “Caravan of White Gold”, a name for the nomads who travel mostly at night and follow the stars to find their way to the remote salt mines of Taoudenni.  Salt traders have traveled this “Land of Terror” route for centuries and some never make it out alive.  The conditions are so harsh that a brutal college hazing ritual or participating on the TV show “Survivor”, would be a vacation compared to the Hades heat, saddle chafing, and dwindling food/water rations experienced on this expedition.

I’m convinced the only way these nomads survive this endless expedition through the sands of the Sahara is because of their nomadic culture.  They have a quick wit, survival skills, patience and endurance to make this crossing, but most importantly they honor the importance of doing this together.  The nomadic culture believes that, “Together we can go slow and far but alone you can go faster and not far.”

Michael Benanav joins the ranks of Fernand Foureau, John Davidson, Friedrich Hornemann, and other Saharan explorers.  Whether you go to Timbuktu or not, read Men of Salt… it’s worth its salt!  http://www.menofsalt.com/

Author Michael Benanav also host slide show events so you can vicariously travel through the Sahara on the Caravan of White Gold.  Contact Michael for more details at:  mbenanav@gmail.com

Michael Benanav is a freelance writer and photographer for The New York Times and other publications. His body of work includes articles and images from places such as Mongolia, Morocco, Mali, China, India, Kashmir, Egypt, Turkey, Ukraine, Guatemala, and Mexico, as well as the United States. He’s produced photo essays for Lonelyplanet.com and Hand/Eye about the Maldhari shepherds of India’s Gujarat state; was one of the few Western journalists in 2008 to write from behind the lines during the Chinese military crackdown on the country’s ethnically Tibetan regions following the Lhasa riots; and was part of a team of two who became the first American travelers in over sixty years to visit Kashmir’s legendary and long-forbidden Gurez Valley.  He has won the Southwest Writers Workshop prize for Best Travel Essay, and is a former contributing editor to The Salt Journal. Benanav’s second book, Joshua & Isadora: A True Tale of Loss and Love in the Holocaust, was published in 2008, and recounts the dramatic stories of his grandparents’ experiences in and escape from Eastern Europe during World War II.  An experienced wilderness instructor, he has led groups on educational and therapeutic adventures through the mountains, deserts, and river corridors of the American West. He lives along the Rio Embudo in northern New Mexico.

A New Course for the Matriarchs of the World

A New Course for the Matriarchs of the World
Interested in planning your own customized adventure? Global Adventuress can help! Email us today!