A Day in the Cotswolds 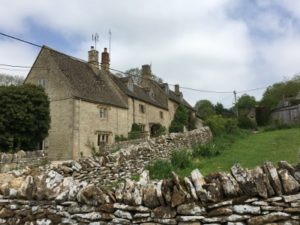 A Day in the Cotswolds
If you have a few extra days in England, a visit to the Cotswolds is a must!
Only a couple hours from London and you’ll find yourself in one of the most beautiful areas of England. We met Genny Stallabrass from Tour Gems to introduce us to the Cotswolds. Genny grew up in the Cotswolds and knows the area intimately. The best way to discover the Cotswolds is with someone like Genny. She knows the most picturesque villages, walking paths, bakeries that make the best scones & more! She told us, “I enjoy sharing the Cotswolds and hope others fall in love like I have,” and we did. We travelled in her air-conditioned comfortable van. She set up her business in 2000 and works alone offering small scale customized tours for 1-7 people. We went on Tour #1 below, and wish we had a few more days to do the other tours she describes below. Another reason to return! Tour #1: The Windrush and Coln Valleys

This tour takes in two of the loveliest of the Cotswold river valleys, both of which contain outstanding villages both large and small, including Bourton on the Water, the Slaughters, Burford and Bibury. The Coln valley in particular is not well known to visitors as the road following the valley bottom is very narrow, but the villages we go through are wonderful. Most people of heard of Chipping Campden, Broadway and Stow on the Wold, but what about Ebrington (pronounced “Yubberton” by the locals!), Ilmington or Snowshill?

Discover such hidden gems on this tour. Beautiful villages and fabulous views from the edge of Cotswolds – what more could you want?

The lovely village of Snowshill

Cirencester, Britain’s second most important city in the Roman era, and lovely Painswick with its wonderful churchyard, are two of the places visited on this tour. There’s also the chance to do a bit of antiquing in Tetbury if desired.

You will see quite a contrast in the Cotswold scenery and, of course, some lovely views and villages.

Tour #4: Highlights of the Cotswolds

If you have not been to the Cotswolds before and only have a day to spare, this could be the tour for you.

It combines elements of Tours 1 and 2, covering the better known places such as Broadway and Bourton on the Water. A taster to make you want to come back for more.

Castle Combe is reckoned by some to be the most beautiful of all the Cotswold villages – judge for yourself!

We also visit Lacock with an optional chance to see the Abbey Cloisters, a location used in the Harry Potter films, and Malmesbury with the fabulous Saxon Abbey and stunning Abbey House gardens (optional when open, but recommended). Please note that entrance fees are not included in the tour fee.

On this tour the morning is spent strolling around Stratford to see some of the sites associated with William Shakespeare, including the house in which he was born and lived his early life, and the famous Anne Hathaway’s Cottage.

The afternoon is devoted to Warwick Castle, the awesome medieval fortress set on a bluff overlooking the River Avon.

Castles of the Welsh Borders

An exciting tour for lovers of castles and ruins. We go to Chepstow, the first stone built castle in Wales, begun within ten years of the Norman Invasion of 1066 and dramatically set on a cliff overlooking the River Wye; Whitecastle, between Monmouth and Abergavenny, a lovely little hilltop castle and very traditional with a moat and round towers; and Raglan Castle, the last castle to be built in Wales, in 1465. All of these are now hugely impressive and beautiful ruins with plenty to see – places to let the imagination run wild in!

We also visit Monmouth, with it’s odd little fortified bridge which is over 700 years old,and the beautiful ruins of Tintern Abbey.

Avebury is the largest stone circle in Europe and although less well known than Stonehenge, with a pretty village partly within the circle and the opportunity to wander amongst the stones and experience the mysticism of the place, it is unmissable.

Silbury Hill and West Kennet Long Barrow are close by and there are white horses carved into the surrounding chalk hills to spot along the way.

Choose a fixed Cotswold England Tour at a fixed price and join some fellow explorers, or let Genny create a personalized Cotswold Tour to include the places you want to see, within reason. Rates and quotes will be shared for standard and customized tours.

Genny adds, “My standard Cotswold Tours are devised to include a bit of everything, so you will see the loveliest villages and plenty of gorgeous scenery; green fields bounded by dry-stone walls, clear trout streams, wooded valleys and so much more. And then there are the views from the Cotswold Escarpment, among the best in England.

My fully guided Cotswold Tours are relaxed and informal with plenty of time to see everything and to do a little browsing through the shops if that’s something you enjoy. I will stop at your request wherever possible so that you can take photographs; believe me, I know how frustrating it can be to see that perfect picture flashing by the window! If the weather is less than perfect, my Cotswold Tours are flexible enough to be rearranged – there’s no point going to a great viewpoint if the hills are shrouded in mist. The day is yours to enjoy – after all, it’s your holiday. So why not give a Tour Gems Cotswold Tour a try – I don’t think you’ll be disappointed.”

We stayed in the village Barnsley, near Cirencester in Gloucestershire at the beautiful manor home the Barnsley House.  Guests feel at home, and can walk through the small village…stopping by the Old Church, Village Pub. The landscaped gardens at the Barnsley House were designed by Rosemary Verey, and are worth a visit.

Our dining experiences were superb at the Barnsley House – be sure to have  breakfast, afternoon tea, and dinner!  The in house Potager Restaurant looks out to the gardens, and the dining room is set with linen napkins and a sprig of rosemary dressing the table.  The Menus are inpired by the on site garden crops and local produce.

Global Adventuress would like to thank Genny at Tour Gems for hosting our chauffeured tour of the Cotswolds – it was fabulous! 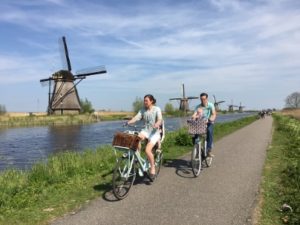 Highlights of Amsterdam
Interested in planning your own customized adventure? Global Adventuress can help! Email us today!