Bosnia-Herzegovina, a Wonderland for Wanderlust 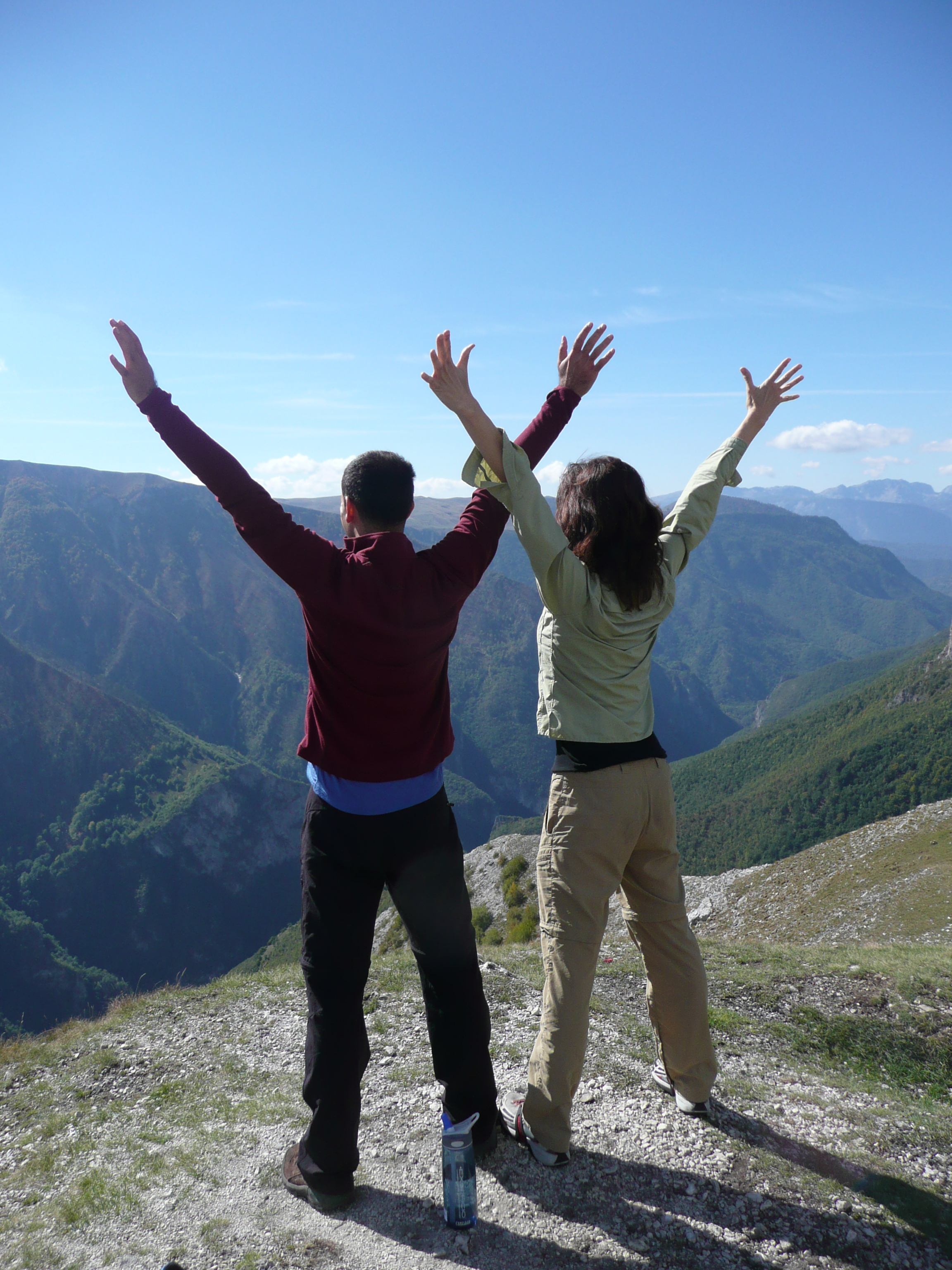 Somewhere over the Atlantic I cracked open a book and fell in. It was Ivo Andrić’s The Bridge on the Drina, a story of an unfamiliar place with a history that impacted the world. I was on my way to this storied place: Bosnia-Herzegovina.

On an early 1990’s Europe backpacking trip, I heard warnings to “stay away” from Yugoslavia due to the war. The country that had proudly hosted the 1984 winter Olympics had fractured into seven pieces: Croatia, Serbia, Slovenia, Montenegro, Kosovo, Macedonia, and Bosnia-Herzegovina (aka BiH), whose capital, Sarajevo, was where my plane was to touch down. My feelings were mixed; I always love exploring new coordinates but with well-documented reports of land mines and post-traumatic stress, I anticipated a troubled country, still cloaked in the miasma of war.

To my utter surprise, I was taken aback by this Balkan beauty and quickly recognized that BiH is Europe’s best kept secret, as well as one of its last great frontiers. Geologically dynamic, the sky-ripping Dinaric Alps extend 400 miles through the center of BiH, and through it carves the deep Tara Canyon – Europe’s Grand Canyon.

This is unspoiled land where wilderness and adventure are not lacking, but rather are available in an almost embarrassment of abundance. Culturally, BiH is in a nexus where East meets West. On every turn, at every table, we were greeted with forty weight Bosnian coffee, and were then not allowed to leave until we downed a glass of fruity brandy called rakia. We were immersed in the mosaic of cultures that intersect at this magical inflection point, from the Mediterranean, Byzantine, Austrian Hungarian and Ottoman empires. During our stay, we learned about BiH’s rich and complex history, how diverse cultures and religions co-exist, and how cuisines blend to create something better than its parts. We danced to traditional folkloric music, and heard fantastic tales of heroes old and recent.

By the time it came to leave, I was enchanted, and eager to share my experiences.

Here are the top 5 things to do when you visit Bosnia-Herzegovina.

1. Hike into Old World Europe: If Lewis and Clark were alive today, they would be blazing trails through the BiH mountain ranges. After a short drive from Sarajevo, we arrived at the remote highland village of Lukomir at 4,500 ft. nestled into a Hobbit-like setting enveloped by mountains and valleys. Lukomir is inhabited by the last semi-nomadic tribe of Europe. With less than 50 remaining inhabitants, we were touched when the eldest woman of the village sent us off on our hike with the traditional open palm wave meaning “no weapons.”

We began our hike through the Bjelašnica mountain range along the Rakitnica Canyon with our guide Alen Causevic.

The vistas were spectacular with multiple mountain ranges marching into the blue distance, and the thick forests exploding with fall color. On the other side of the steep 2,400 ft. limestone canyon walls, Bobovica village sat perched on a ledge with rounded haystacks and sheep grazing on the grassy slopes. Along the trail we found native purple thistle, wild thyme, St. John’s Wort, rose hips, sunčanica and vrgani mushrooms.

Occasionally, we stumbled upon a medieval tombstone (stećci) on the hillside that allowed us to reach across time and touch the spirits of people long before us, but probably not too different. After three hours our hike ended at Umoljani, where villagers greeted us with a homemade, organic meal of soup, potato cakes, and other delicious local specialties.

2. Raft Neretva River, the “Emerald Gem”: The Neretva River is a main water source to many villages in BiH as it flows south to the Adriatic Sea.

We were excited to join two river rafting legends – George Wendt and Richard Bangs on these bright green waters. Our bus left Sarajevo and wound its way through mountains along the river, and we eventually arrived at the rafting station where the owner Kasim Džajić introduced us to our rafting guide, Neremi. There was a fall chill in the air, so Mrs. Dzajic warmed us in her kitchen with hot drinks and homemade Bosnian donuts slathered with plum jam. I felt sufficiently prepared to don the wet suit that would cocoon me on this next adventure.

We found a good entry spot, stepped into the rafts and started to paddle through the narrow passageways. We craned our necks to look up the steep white limestone cliffs. The cold glacial water was pristine and crystal clear. While this river is known to reach Class V earlier in the year during spring runoff, on this fall day the river gave us a gentle Class II ride back to the station.

From this point, an interesting side trip is a visit to Tito’s secret nuclear bunker, only a mile from our rafting takeout. Other BiH rafting options include the Vrbas and Tara Rivers where the 2009 World Rafting Championships were held.

3. Ski the Olympian Slopes of Mt. Jahorina: As you head southeast from Sarajevo to the site of the 1984 Winter Olympics, you’ll find four months of good, skiable snow at great values, especially compared to other European ski resorts. We arrived on a fall day too early for ski season, so instead, we checked out a few short hikes around the village. We saw a number of hotels where skiers can find a range of room options from the very basic to luxurious, such as the Termag Hotel. Chalets with open fireplaces are another option offering cozy Alpine style après-ski relaxation after an exhilarating day on the mountain.

4. Bike the Open Stretches: There are many options for cycling, both road and mountain biking. Long open stretches from Stolac towards Trebinje, in the Popovo Poje

region, will give legs and lungs a workout as you find your perfect cadence through rolling, forested landscapes. The scenic valleys of Livanjsko and Glamocka in Western Bosnia are made for road biking, according to Tim Clancy’s Brandt Guide. Tim also notes that “hundreds of highland villages are connected by good gravel roads almost everywhere in the country. Igman–Bjelasnica-Visocica in the Sarajevo area offers days of mountain-biking trails in breathtaking mountain landscapes.” He cautions that there are still some landmines off the beaten path and it would be wise to consult a local guide before venturing out.

5. Embrace the Rich Culture of BiH: Bosnia-Hersegovina is a land of more than 200 castles built between the 12th and 15th centuries. There are many old towns and villages worth exploring starting with these well-known ones you “must see”:

Sarajevo: In Sarajevo, I woke up to the sounds of trams, tower bells and calls to prayer from the tops of minarets. This city’s skyline is punctuated with minarets, churches, synagogues, and clock towers that can be seen from restaurants high in the surrounding hills. Many of the city buildings still show scars from the tank shellings and attest to the longest siege on a capital city in modern history. A visit to the War Tunnel Museum allows graphic explanation of how Sarajevo citizens suffered, united and ultimately survived the siege.

For a change of pace, we sat down to enjoy a coffee with young locals at Café Tito. The aroma of strong Bosnian coffee prepared in a džezva (copper pot) with baklava and sweets at one of the open air cafes made me want to linger longer. Mix with the locals and slake your thirst from the Sebilj fountain, and try some Buregdžinica (thin phyllo filled, rolled and baked) with burek (meat filling) zeljanica (spinach), or sirnica (cheese). For a shopping adventure, step into the covered market called the suk, and then get lost in the narrow alleyways of Bascarsija, the city’s old quarters where authentic artisans and craftsmen can be found working their trade.

Mostar: The medieval town of Mostar is a UNESCO protected heritage site known for its charming old bridges and cobblestone streets. The Stari Most Bridge, commissioned by Suleiman the Magnificent in 1557, symbolically connects the Muslims and Croats on both sides of town. The bridge was destroyed by tank shelling in 1993 and rebuilt in 2004. Today, villagers and tourists watch daredevil locals dive from the 80 foot bridge and plunge into the freezing Neretva River. From Mostar, there are other day tours to consider including the wine country where you can sit down and enjoy an afternoon visiting with the vintners and pair your wines with a variety of local cheeses, or take a short drive to the beach and bask in the sun on the warm sands along the Adriatic Sea.

Pocitelj: Pocitelj is another UNESCO World Heritage Site and only a short drive from Mostar. Set next to the Neretva River, the city is known for its oriental architecture and Ottoman influence. Before ascending the steep cobblestone staircase to the watchtower on the hilltop, I bought a cotton candy-like cone filled to the brim with pomegranate seeds, tiny figs, apricots, and almonds ready to eat. The town has a mosque, citadel, Medresa (Muslim religious school), Hamam (public bath), and housed one of Europe’s oldest art colonies.

Our hiking guide Allen, summed up the Bosnian spirit when he recited one of Mak Dizdar’s lyrical Stone Sleeper (Kameni Spavac) poems about the Bosnian landscape and its’ history. Since pre-historic times, Bosnia-Herzegovina has been the crossroads of eastern and western civilizations and one of the most diverse countries one can visit.

You’ll want to visit Bosnia-Herzegovina before everyone else does – it’s a wonderland for wanderlusts!

Acknowledgements:  We would like to thank USAID and RichardBangs.com for including us in this delegation to BiH, and to ExOfficio for sponsoring us with ExOfficio clothing and gear.

PATRICIA STONE is a Seattle-based travel writer and Chief Explorer of www.globaladventuress.com.

Interested in planning your own customized adventure? Global Adventuress can help! Email us today!