A Mycologist’s Dream at The Herbfarm 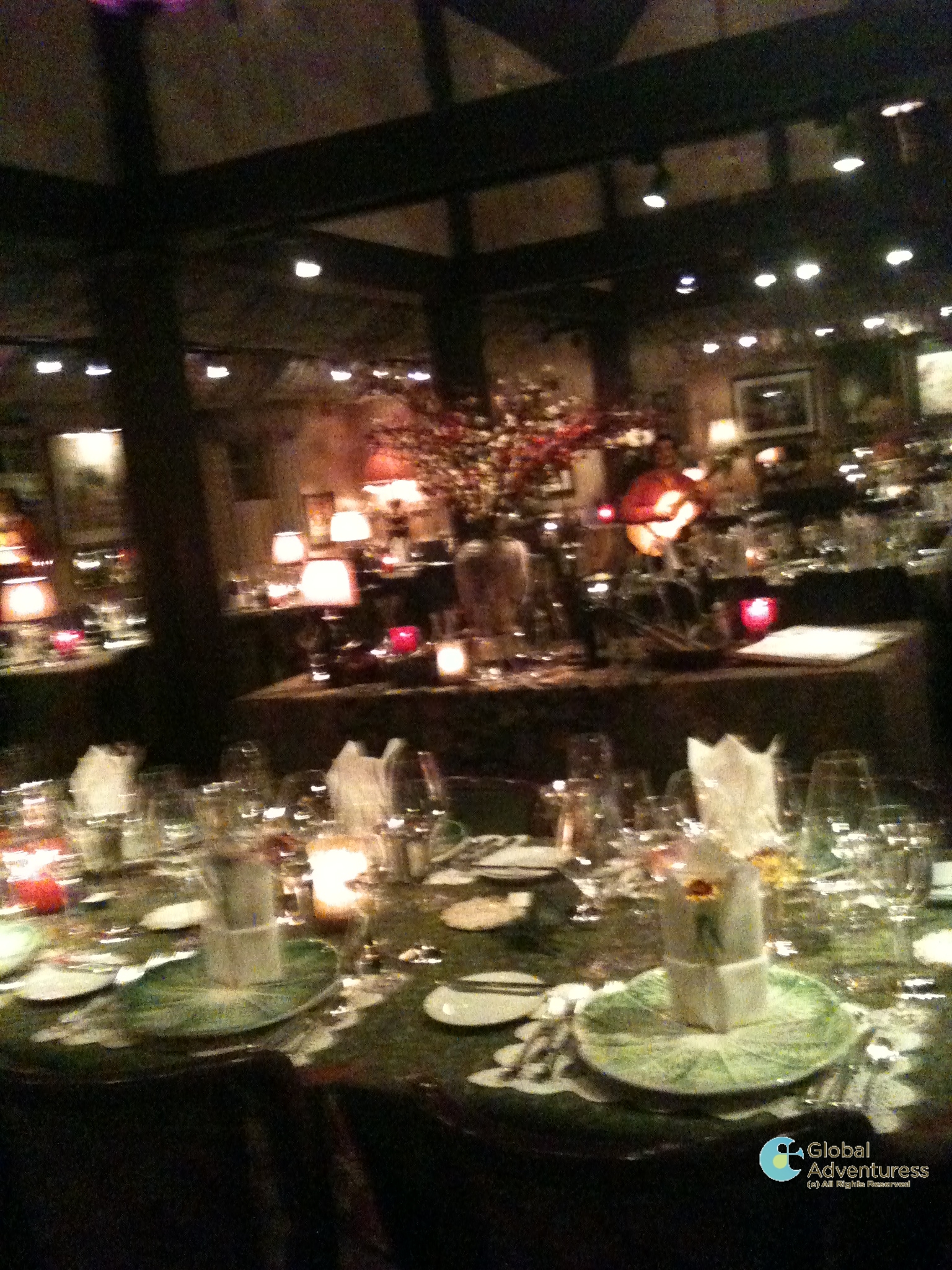 On a recent autumn evening, we were invited to partake in a wild mushroom feast at The Herbfarm with a 9-course menu featuring a variety of mushrooms that were gathered from the Pacific Northwest wilds.  This menu is one of 26 different dinner themes that are uniquely created by The Herbfarm to celebrate the seasons.  Seasonal ingredients are gathered daily from nature’s bounty in the field, forest, farm and the sea.

Rated Number 1 Destination Restaurant in the World in National Geographic’s “The 10 Best of Everything”, we were confident in The Herbfarm’s experience to guide us through “A Mycologist’s Dream” Menu.  This was important to us since we had heard that “approximately 4% of mushrooms are considered tasty, and the other 96% of the 10,000 known fungi species in North America are inedible or indigestible, edible but tasteless, and the rest will make you sick or can kill you.”  source: www.MushroomtheJournal.com   It was also reassuring to hear that we were dining in the Northwest Puget Sound which has the oldest and largest Mycologist Society in the World, and America’s best-known wild food forager, Jeremy Faber had picked our mushrooms!

Before sharing the dining experience, it’s helpful to understand The Herbfarm’s beliefs and origins.

The Herbfarm believes “that no dish can be better than its ingredients, and that the best ingredients are usually local.  Freshness is ephemeral, and geography expresses itself in the taste of the food – sometimes subtly and sometimes
profoundly.  The foods and wines of our region share a similar motherhood of soil and weather, making for happier culinary marriages than those from dissimilar climates.  The Herbfarm believes that chefs who cook with local ingredients – season by season, year after year – develop a more complete understanding of the foods than chefs who do not.  This understanding can give rise to greater expressions of the food, its preparation, and enjoyment.  The Herbfarm believes that supporting local farmers, foragers, cheesemakers, wineries, and fishermen helps preserve local foods.”

These high standards have helped The Herbfarm achieve its well-deserved high ratings.  The founders, Ron Zimmerman and Carrie Van Dyck, graciously greet each guest with a welcome in their Salon next to a century old large fireplace, and share the story how in 1974 a few chives grew into The Herbfarm Restaurant.  You can read the history at this link:  http://www.theherbfarm.com/about/history.html.  As Ron and Carrie take you to your seats in the comfortable high vaulted dining room decorated with art objects from around the world, guitarist Patricio Contreras serenades you throughout the meal with live music.

, or visit the chef’s library with its impressive collection of books.

Many claim they had the “most memorable meal in a lifetime!” at The Herbfarm, and after experiencing the following courses and wines, we felt the same way.

Chris Weber is the youngest chef in charge of any of the 42 AAA “5-Diamond” Restaurants in America and was inspired to create this menu for the “Mycologist’s Dream”.  Sommelier Bruce Achtermann carefully selected the wines that paired with each of these courses.  Both provide their synopsis and context for each of these courses and pairings below….in their own words:

Matsutake flan with Smoked char roe and lemon thyme: This dish focuses on the repetition of the delicate flavor of Matsutake mushrooms in varying textures with the lemon thyme as a lighter counterpoint and the saltiness of
the roe to amplify those flavors.

Weathervane scallop, braised cabbage and morel mushroom sauce with tarragon; This bite is a linear focus of flavor using scallops that go so well with the sweetness of cabbage that pairs with tarragon to accent the earthiness of the morels.

Paired with “Shroom-pagne Cocktail–Treveri Cellars Sparkling Pinot Gris with Choice of Wild Mushroon Elixir:
We establish our mycological theme by allowing guests to choose a wild mushroom extract, which owner Ron Zimmerman prepared. Depending on the night, guests could choose Morel, Boletus, or Trumpet of Death extracts. Because the elixirs are built on a simple syrup base, they add just a touch of sugar to the final beverage when the sparkling wine is added. This essentially turns the “brut” into a” demi-sec,” a wine with just a touch of sweetness. A glass of bubbles
with an almost imperceptible undercurrent of sweetness actually appeals to most more than a fully dry wine does. In this case, the earthy qualities of the mushrooms ride along, ephemerally creating a liaison with the mushroom dishes
of the first course.

This is a very minimalistic dish with a strong Japanese sensibility. The richness of Shiitake mushroom broth enhanced by smoked tuna mimics the smokiness of the wood roasted cod and the fat content that the fish has. The radish adds spice and freshness and the leek is for a savory, textural contrast.

Paired with Cinder Winery Dry Viognier, Snake River Valley, Idaho:  Thirty years ago, the grape varietal Viognier was almost extinct. Its last stronghold was in its native home, the Rhōne Valley of France. Then the tide turned for the grape as more and more New World winemakers took interest. Melanie Krause, who had made wine for Chateau Ste. Michelle as well as Washington’s Canoe Ridge Winery, suspected that her native Snake River Valley in Idaho might have ideal conditions for Viognier, both the climate and the  soil. Her winery, named for the volcanic soils of her vineyards, has just the right heat during the day with cool nights to fix the acids in the wine. While many American Viogniers can be overly aggressive, with massive stone fruit noses and a flabby body, Melanie’s strikes just the right balance and has become her signature wine.

Third Course:  The Green and the Gold

Paired with 2009 Amalie Robert Chardonnay, Dijon Clone, Willamette Valley, Oregon:  The early years of winemaking in Oregon were heady with promise. Pinot Noir, the great grape of Burgundy,was showing promise
and flummoxing the world in blind tastings in Paris (“Judgment in Paris,” “Bottleshock”).

Just as Pinot Noir hails from Burgundy, so does Pinot Chardonnay. But to establish the grape in Oregon, winemakers brought cuttings north from California to create the Chardonnay vineyards. In most seasons the grapes do not fully develop, and thus Oregon produced unremarkable, (to be kind), Chardonnays. This all changed in the late 1980s when new vine material was brought over from Burgundy. These Chardonnay clones, named “Dijon,” from the viticulture research station in France, were a great leap forward. The Amalie Robert Chardonnay shows the grace of this new style of Oregon Chardonnay.

Braised King Boletus Edulis, Potato millefeuille, foie gras sauce, cippolini onions and swiss chard.
A “meat and potato” dish. If you think about a classic steakhouse “entree” you’ll probably be thinking of roasted beef, potatoes, braised greens, caramelized onions and a rich sauce. All of the same elements are found in this presentation; the main difference is that we have replaced the beef with the meatiest of mushrooms, the King Bolete.

Paired with 2007 Beaux Frères Pinot Noir, Willamette Valley, Oregon:  Made by the great wine critic (Robert Parker)’s “beaux frères” or brother in law, Mike Etzel, Beaux Frères has become an icon in Oregon for outstanding Pinot Noir. This is a gem of a wine from a difficult vintage. One of the keys to this pairing is decanting the wine early enough to allow more of the forest floor notes to emerge. The cooler 2007 vintage also helped to retain natural acidity, which helps parley to the unctuous texture of the foie gras reduction.

Fifth Course:  Taste of the Vineyard

Bay laurel Gelee, whipped buttermilk, Merlot granite
This palate cleansing course uses some of my favorite fall flavors, the spice of fresh bay laurel in the form of a light gelee, acidic butter milk left over from making our own butter, and the fresh pressings of  world famous Yakima Valley merlot grapes. Created by a chance happening as a local winemaker found himself with extra merlot grapes and as he was on his way back from Yakima valley he dropped them off for us to use. We pressed them and after tasting decided to simply freeze the juice and turn it into a granite—it was that good!.

Jeff Rodger’s Lamb roasted whole, cannellini bean puree, pink banana pumpkin, glazed fennel, English thyme jus.
The success of this dish lies in the proximity of ingredients to the restaurant. By this I mean that all of the vegetables on the plate are coming from our farm less than miles away so we are able to use them at the peak of their ripeness. But the real star of the dish is the lamb from Duvall (about 10 miles east of the restaurant) Jeff is the only certified organic/grassfed lamb producer in the state. In my opinion Jeff raises the best lamb in the country.  We are able to see the lambs just after they are born in March and watch them grow until October when they are harvested. Seeing the care and dedication that Jeff devotes to raising these lamb, the challenge in cooking them is making sure I’ve done all his hard work justice.

Paired with 2005 Corliss Estates Cabernet Franc, Columbia Valley, Washington:  Cabernet Franc is usually seen as a smaller cousin of Cabernet Sauvignon and Merlot. But in the right context here in Washington, it expresses itself with both power and grace in the context of a meal. Corliss is a very well-funded winery. Though 10 years old, only a few of their wines have come to the market. Michael and Laurie Corliss love aged wine, and the premise of their winery is that they will release a wine when it is mature enough to fully enjoy.

This wine was barrel aged for over two year and then allowed another 4 in bottle. The result is a rich wine with just the right body and balance for the lamb.

Rogue creamery Caveman Blue Cheese, Cider braised Saffron Milky Cap mushroom strudel and sage
This is one of the most unusual and also one of my favorite preparations of mushrooms. Using the earthiness of saffron milky cap mushrooms and the sweetness of apple cider, we braise the mushrooms and roll that ragout into hand pulled strudel dough. The dough is a lost art in and of itself; it takes an incredible amount of patience and a delicate touch to stretch this very elastic dough so thin that you can read a newspaper through it. Then we roll it around the apple-mushroom ragout and bake it until it is flaky and crisp. This is served with a smoky, natural rind, raw cow’s milk cheese from the Rogue River Valley in Oregon.

Eighth Course:  Pear Edulis Toadstool
Here we are trying to recreate visually the look of a toadstool that you might happen upon while foraging through the woods. The stem is made of Seckel pear that has been poached with Douglas Fir fronds and filled with hazelnut pastry cream. The cap is a brandy snap cookie filled with candy cap mushroom mousse.  Candy caps are quite possibly the most unusual mushroom I have come across. The flavor is incredibly similar to that of maple syrup, maybe even more pronounced. Surrounding the toadstool is crushed hazelnut and Douglas Fir powder.

We thank you and applaud The Herbfarm Proprietors, Chef, Sommelier and Kitchen Staff for a magical evening!

You can’t help but applaud at the end-Financial Times

Number 15 in US per Gourmet Magazine

The only AAA Five Diamond Restaurant North of San Fran, West of Chicago

Celebrating & Connecting Women in the Gulf Cooperative Countries
Interested in planning your own customized adventure? Global Adventuress can help! Email us today!